Are the Rumors True? Cold Weather and Green Energy

Are the Rumors True? Cold Weather and Green Energy 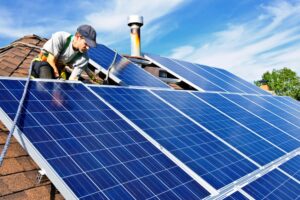 Green energy came under scrutiny when the country experienced extreme winter temperatures and storms –affecting states that don’t typically experience such inclement weather.  Now that warm weather is arriving and the buzz has settled down, let’s consider the facts about winter weather and green energy.

Contrary to some misconceptions, solar energy is not generated by heat but by photovoltaic light from the sun. The PV light hits the solar panels, creating motion among electrons in the panel’s silicon. This creates energy, which is then harnessed into electricity. Here’s the thing, cold electrons are resting electrons. And when the high-energy sunlight initiates movement, the more significant difference in that voltage creates higher energy. Sometimes as much as 15% more!

The drawback is that winter days are shorter, so you will see lower amounts of energy produced despite the optimized conditions. (If we could only figure out how to make the day’s last longer…)

However, winter sometimes also brings stronger winds, so a hybrid of solar and wind power can make up the difference.

It’s true that solar panels don’t produce energy when covered by heavy amounts of snow. So if your solar panel is buried in the snow, it’s not going to do any good.

However, the panels are also designed at an angle to prevent snow from building up. And they’re also designed to help snow and ice melt quickly. If that’s not enough, the snow can be removed with solar panel snow rakes.

Plus, solar panels are designed to hold specific amounts of weight and are quite durable. However, different panels and systems come with various pressure capacities, so some are stronger than others.

Solar power is best generated under direct sunlight. However, because solar power is generated by PV light, it still works during gloomy, cloudy days. The photovoltaic light travels through the clouds (which act as a giant light diffuser) and reaches those panels. The density of the clouds affects this, and that’s where stored energy comes in handy!

Perhaps the biggest unknown about renewable energy is that it’s site-specific. While most coal and natural gas plants operate the same in Indiana as in Georgia, solar and wind farms are designed to react to and with the topography and general weather patterns of that area.

It is especially true of wind power. For example, the cold state of New York is home to Maple Ridge Wind Farm, the largest wind farm in the state with 195 turbines functioning year-round. Their turbines are designed with de-icing mechanisms that sense ice and stop the turbine temporarily. Internal heating elements melt the ice on the blades.

But in a generally warm state like Texas, which experienced massive power outages during the storm partly due to the loss of power from frozen turbines, de-icing components are considered an unnecessary extra cost for something that’s not typically required.

Either way, even with highly efficient internal de-icing methods, ice sometimes gets so thick that an occasional helicopter is called in to help de-ice the blades from the outside.

We hope you enjoyed this mini-lesson on green energy. At Gillmann Services, we’re proud to stand behind renewable energy. With an additional focus on manufacturing, mining,  and marine construction, we’re dedicated to supplying quality talent to our customers. Remember, “We Work for You!” Need a hand with recruiting and hiring – we’re here to serve you all year long – in cold weather or warm.

About the Author: Gillmann Services