The Run Down on Renewable Energy

Home/Uncategorized/The Run Down on Renewable Energy
Previous Next

The Run Down on Renewable Energy 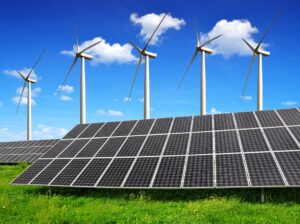 As research and development continue to expand, the concept of renewable energy is becoming more mainstream and accepted. In fact, as of 2020, renewable energy generates up to 20.6% of the electricity in the United States.

Renewable energy is precisely what it sounds like –renewable energy. Renewable energy is clean and sustainable, sourced from natural, always present, never-going-to-run-out resources (such as the sun, wind, or water). And while fossil fuels (such as coal and gas) are affordable, they can cause damage to the environment and are finite. Someday, the planet will have no more coal left to burn. But the sun will always be there, and the wind will always blow.

There are some considerable benefits to renewable energy!

Hydro Power: Hydroelectric plants harness the energy of rushing river water. The force the water churns into giant turbines, propelling a generator and producing electricity. The Grand Coulee Dam, located in Washington State, is the largest hydroelectric plant in the U.S., producing 21 billion kilowatt-hours of electricity every year.

Wind Power: Wind power is the most significant source of renewable energy in the nation. The skyscraper-tall turbines are turned by the wind, driving an electric generator. These turbines are connected to electrical power transmission networks. Wind farms pepper the landscape in almost every state, with Texas, Iowa, Oklahoma, and Kansas leading in energy production.

Solar Power: Solar panels of photovoltaic cells harness the sun’s rays and turn the heat into energy. Solar panels can be installed onto rooftops and community projects, providing local power. In addition, solar farms provide power to a much larger grid —creating electricity for thousands of homes and businesses. California generates the most solar power in the nation, producing 29,440 gigawatt-hours of energy in 2020.

Geothermal Energy: The earth’s core is almost as hot as the surface of the sun. Geothermal energy takes advantage of this. Geothermal plants drill into the planet, capturing the heat and steam in the earth’s subsurface. The steam is piped into turbines that generate electricity. The Geysers Geothermal Complex, located north of San Francisco, is the largest producer of geothermal energy in the world.

Biomass: Plants use photosynthesis to convert energy from the sun into chemical energy (which transfers to animals who consume them). When organic waste from the animals plus plant and wood decay is burned, the energy is released back into the atmosphere. This biomass converts into energy through thermochemical conversion, chemical conversion, or direct combustion. Biomass energy isn’t the cleanest form of renewable energy but still produces a lower carbon rate than fossil fuels.

Wave Power: Tidal and wave power are up and coming on the renewable energy scene. Like hydroelectric power, this type of power relies on the predictable twice-a-day tide to harness and convert its force into energy.

At Gillmann Services, we’re huge fans of renewable energy! We’re also huge fans of working for you. We work hard to match the right candidates to you and your company. So, if you’re looking for some new talent, call today, and let’s get started.

About the Author: Gillmann Services